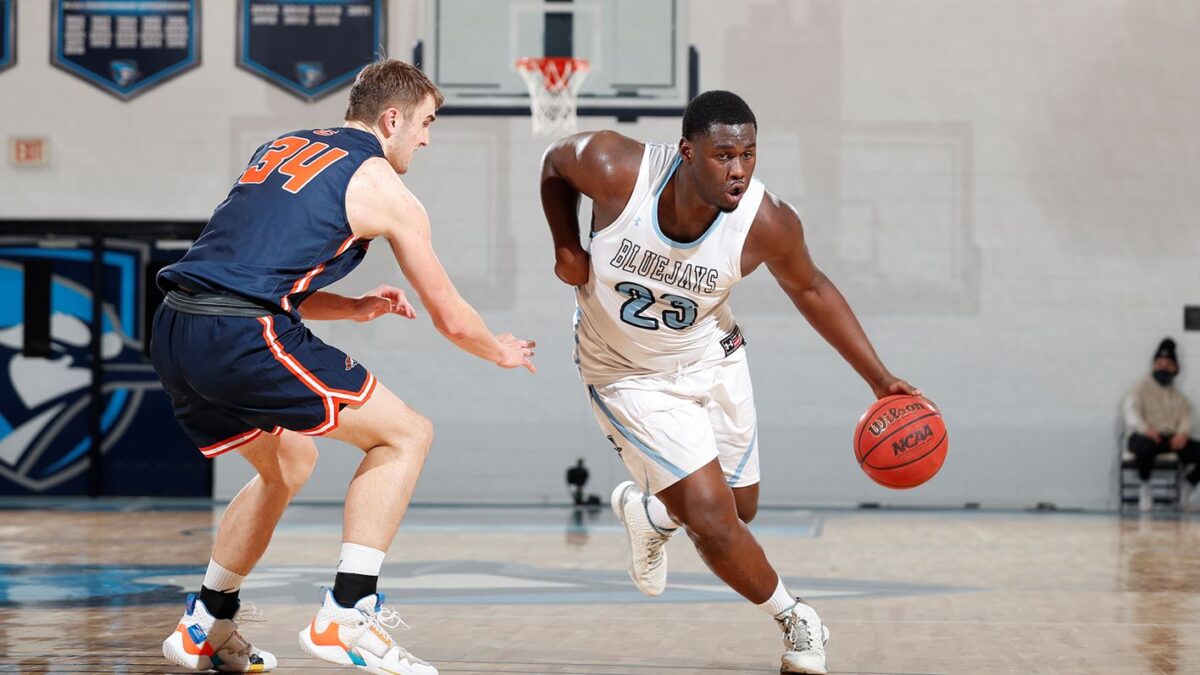 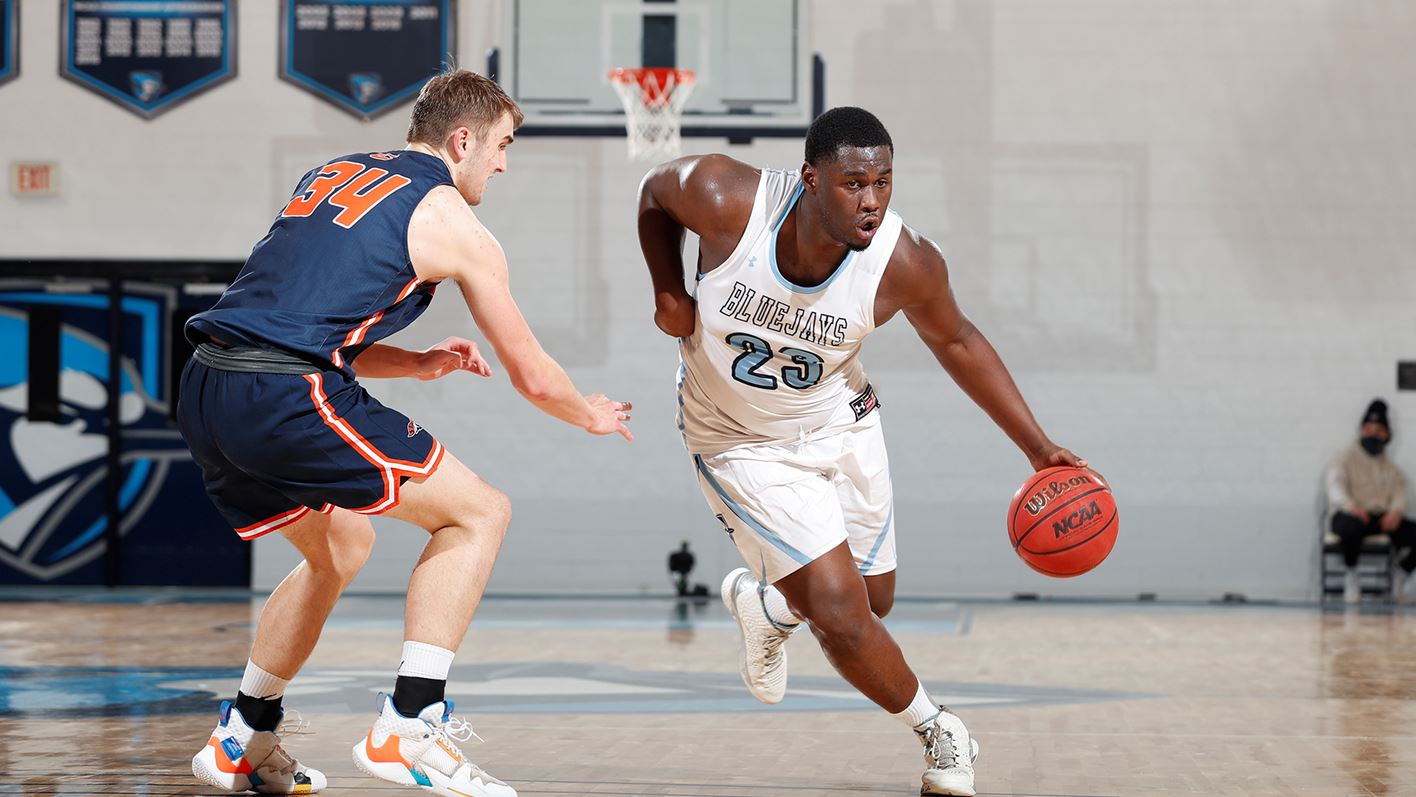 We are “Marching” right into the half-way point of the semester, and the Bluejays are keeping the action coming. Football is back for a short time, and the baseball team is off to a solid start. The men's lacrosse team and the women’s volleyball team continue to dominate.

The Bluejays headed into the semifinals with all the momentum going for them, but fell short. The Bluejays lost to Illinois Wesleyan University 75-65, ending their 2021 season and their run in the CCIW basketball tournament. The game was close the entire way, with the Bluejays only being down 10 points after the first half; however, the offense hit a wall. In two sequences (both the first and second half), the Bluejays were outscored 24-6 and 21-5, which ultimately sealed their fate.

The Bluejays’ usual leading scorers were rather quiet in the game. Jay Militello only had nine points after leading the team in the quarter final against Carroll University with 27 points. Ocean Johnson got only four points and went 0-5 in field goal attempts. Dominic Genco provided most of the offense for the Bluejays, with a season high of 23 points, most of them coming in the first half. The Bluejays end their season with an overall 7-3 record.

The team is still in good hands next season with the development of sophomores Ocean Johnson and Jonathan Zapinski. Both players were among the team leaders, scoring on multiple occasions during the regular season.

Flying high: Bluejays start the season by stealing the show with their pitching.

It has been a very positive start to the Bluejays’ baseball season, with the team going 5-2 in their first seven games. They opened the season with a 14-4 win over Wheaton College. Their only two losses of the season have come against out-of-conference opponents, Eureka College and St. Norbert College, who is 6-1 on the season.

The Bluejays have been led by infielder Trey Romay batting .440 with three home runs and maintaining a slugging percentage of over a thousand. Pitching has been the strong suit for the Bluejays, averaging 8.5 strikeouts a game, and they have yet to give up a home run this season. Starters Jaysn Miller and Alex Kielion both have season high nine-strikeout games. Kielion went a season-high of ten and two-thirds innings against Rockford University.  He was lights out, posting a 0.89 ERA and only giving up two runs on eight hits.

The problem with the Bluejays’ offense has been strikeouts. The Bluejays are second in the league in strikeouts, only trailing Illinois Wesleyan’s over 50 strikeouts. The Bluejays have a three-game series against Illinois Wesleyan University on March 20. The first two games will be played in a double-header in Bloomington, Ill. The rubber match on Sunday will be at Lee Pfund Stadium at Legion Field in Carol Stream. Other upcoming games will be at Augustana College on March 24, at 3 p.m. CST, and a home double-header against Millikin University Saturday, March 27. The first game against Millikin is at 1 p.m. CST, and a limited number of fans will be able to attend.

Staying hot: Men’s lacrosse off to a 4-1 start.

The Bluejays suffered their first loss of the season to Benedictine University 9-3, snapping their four game win streak. Benedictine scored six straight goals in the first half, and the Bluejays didn’t muster much offense. A few shots got through, but were wide of the net. The Bluejays came into the second half looking much better, but still had trouble scoring at the start of the third quarter.

The Bluejays were sloppy. Players were bumping into each other, sending passes well over their targets' heads, and struggling to recover ground balls. They scored three consecutive goals to climb back into the game, but that is all they were able to provide, as Benedictine responded with three more of their own to win the game 9-3.

Despite the loss, the Bluejays are still 4-1 on the year and have averaged over 12 goals a game. Both attackers, Ben Luke and Marcus Yandall, have a combined 45 points in five games and have been the Bluejays’ leading scorers. They currently sit second in the conference at 4-1, trailing Carthage College with 6-0. Their next games are against Concordia University-Wisconsin on March 24, at 7 p.m. CST, and Transylvania University on March 27, at 1 p.m. CST.

The season has just begun and is already looking promising for the Bluejays. The team is currently on a three-game win streak and are eager to add another win to their collection. They have not played an official game since their last victory against Carthage College on March 9, but held an exhibition match against North Central College on March 13. Following the postponement of the matchup against Millikin on March 19, their upcoming games will feature three home matches: Carroll University on March 23, at 5 p.m. CST, North Park University on March 30, at 5 p.m. CST, and another exhibition against North Central College on April 6, at 5 p.m. CST. A small number of spectators will be allowed to attend all three home games.

Return to the gridiron: Football returns to campus over a year after the last game was played.

As the weird keeps getting weirder, the Bluejays are getting ready to play a series of exhibition and scrimmage games against a handful of in-conference opponents.

The schedule includes exhibition matchups against North Park University at Langhorst Field on March 20, at 1 p.m. CST, and at Carthage College on March 27, at 1 p.m. CST. The Bluejays wrap up the short practice series with a scrimmage against Carroll University on April 2, at 2 p.m. CST, and a home exhibition against Illinois Wesleyan University on April 16, at 6 p.m. CST. A limited number of fans will be able to attend both home games against North Park University and Illinois Wesleyan University.

Although the games will not be official, excitement to have football back is building. The last Elmhurst football game was Nov. 16, 2019. The Bluejays want to rebound from the 2019 season where they went 1-8. They are also hoping to get their first win since Sept. 28, 2019, where they beat Carroll University, 32-30.

The 2021 season has not been kind to the Bluejays. Theys are just 1-3 in their first four games of the season. The team was shut out 3-0 in their first game against Dubuque University, and followed that up with an 8-2 blowout loss to Wisconsin Lutheran College. They split a double-header against Lake Forest College, but still gave up 17 runs in the two games played. Pitching has been an issue, in addition to cold bats. The Bluejays have been held to 10 hits or fewer in all but one game, which was their only victory of the season against Lake Forest College.

Mia Tran and Alyssa Filkowski are responsible for the few bright spots so far. They lead the team with their batting averages, and with over 13 hits combined over the course of the first four games. Mia Riese has the team's only home run of the season so far, which came in their win against Lake Forest College.

While the season is off to a rocky start, there are still plenty of opportunities to turn the season around with upcoming series matchups against North Park University, North Central College, and Wheaton College.